It’s been quite some time since our last update, we’ve apparently been enjoying summer quite a bit more than expected…. 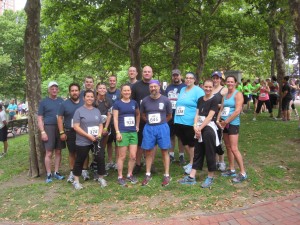 It was a mild and overcast day, very unlike any other July in Rhode Island. We had started our stretching routine and gotten the bibs that would mark us official participants in the Providence Craft Brew Races. I was a bit apprehensive of the task ahead knowing full well that my training schedule had been delayed a few weeks by a sprained ankle. There was a mixture of emotions from the RIBS team who boasted 22 bodies when all was said and done. We weren’t sure what the outcome of the day would be but we did know that after a short run we’d be swigging samples of the finest craft beers around.

The call came and we gathered at the starting line…and waited….and waited. Anticipation led to boredom and eventually a deep thirst for some cool suds. Every so often we caught a glimpse of Matt, the race organizer, glued to his phone and getting gray hairs by the second. We all paused to pay respect to our country and those who fight for it during the National Anthem.

Finally, the time came and we were off. Kate disappeared in a cloud of smoke before anyone knew where she was. The rest of us stayed in a group for most of the first mile but eventually separated. After a while I was all alone, I guess you really do have to train to run a 5K. As I was plodding steadily along, I saw members from all the teams, wearing their requisite jerseys. The two largest teams, The Running Fools and Bucket brewery had a steady stream of runners throughout the whole race. I saw many other smaller teams such as RIGPO, Craft Brew Supplies sometimes passing me, other times in lock step.

Passed the first water station we made our way down to the Point Street Bridge and on passed the Wild Colonial. I would have stopped in for a beer if it hadn’t been 11 in the morning, oh and I was being timed after all. We crossed back over the river and went back through downtown to Empire street. Finally as we rounded the Trinity corner we caught sight of our goal, the finish line. I decided it was better to run across the finish line rather than walk. Just one last short push and the torture would be over.

I crossed the line grabbed my medal and looked for my team. They were nowhere to be found, but I knew where they were, they were already sampling. The festival was already getting crowded but there was still plenty of choices and short lines. It was similar to the winter festival but since we had no table, all could drink and enjoy. We spent the rest of the time sampling great brews and talking amongst ourselves about the race, running, beers and anything else we could think of.

All in all, the Craft Brew Races were a wonderful event and we look forward to next years race. I personally will train up a bit more but just so I can have an earlier crack at the beer.